An American ex-English language teacher in China, who has pleaded guilty in a US court to child sex charges, had attempted to blackmail one of his former students into sending him pornographic images.

The man now faces at least 15 years in prison, according to a news release on the website of the US Department of Justice by the US Attorney’s Office in the Western District of Missouri.

According to the office, Curtis J. Baldwin, 47, pleaded guilty on October 5, “to one count of the sexual exploitation of a minor and one count of receiving and distributing child pornography.”

The document states Baldwin worked as an English language teacher in China for EF Education First but left the company on November 20, 2019.

After he returned to Springfield, Missouri, Baldwin contacted a 12-year-old former student, identified in court documents under the pseudonym “Jane Doe,” via the WeChat application.

He allegedly told the girl that he had pornographic video footage of her, and threatened to post the video on the Internet unless she sent him images and a video of herself engaged in sexually explicit conduct. 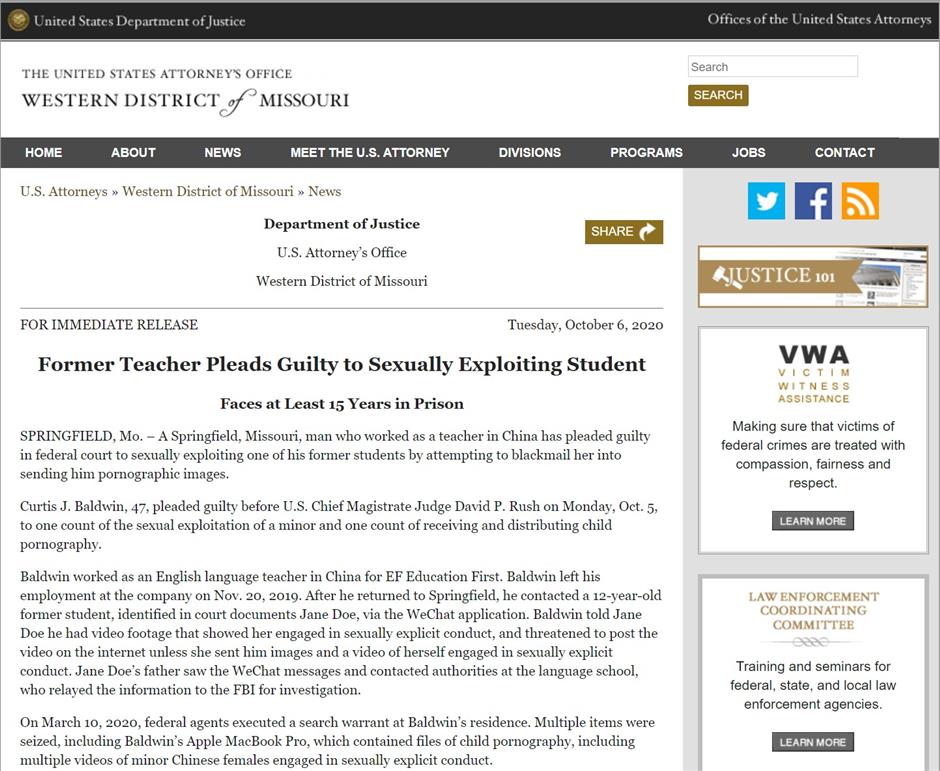 A news release about the case on the website of the US Department of Justice.

“Jane Doe’s” father saw the WeChat messages and contacted authorities at EF, who relayed the information to the FBI for investigation, according to the attorney’s office.

When US federal agents executed a search warrant at Baldwin’s residence on March 10, they seized multiple items. In Baldwin’s Apple MacBook Pro, they found files of child pornography, including multiple videos of minor Chinese females engaged in sexually explicit conduct.

A sentencing hearing will be scheduled later.

It said that it had ended the employment contract with Baldwin after he was found to be in violation of the company’s code of conduct for employees, without elaborating on what the violation was. SOURCE: https://www.shine.cn/news/world/2010248353/

Next post Do Not Travel to Kashgar, Xinjiang in the Nearest Future – Hefei CDC